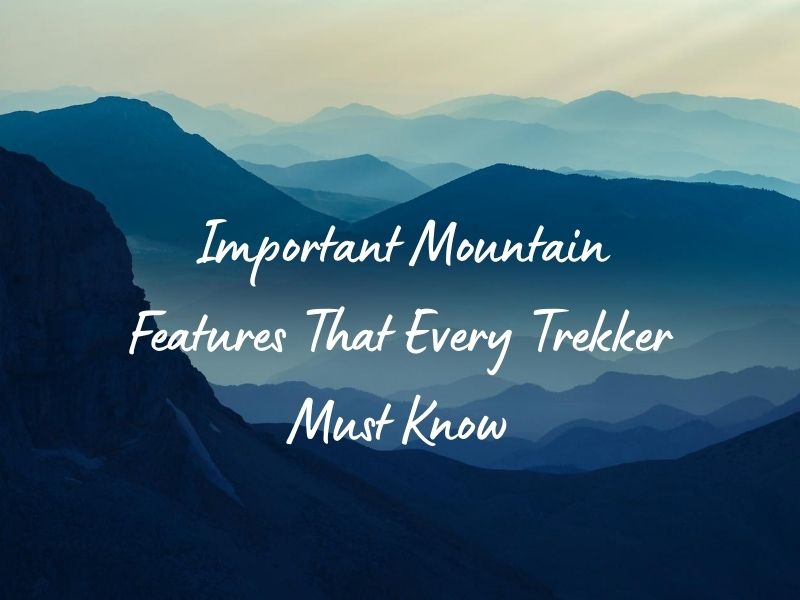 Won’t it be great to know about those lofty giants whom you consider your second home and marvel at the finesse of nature’s creations.? While trekking is all about exploring and connecting with the mountains, it is also important that you know as much as possible about them because along with their inexhaustible charms, there are also some hidden treasures of knowledge and learning. Moreover, you can’t call yourself an avid trekker unless you are acquainted with at least some of these important mountain features. So, here is the list for your rescue. Read it, add these mountain climbing terms to your vocab, and you’ll be good to go.

A mountain pass is a path/route which aids in navigation through the mountain ranges. It is basically the depression between two mountain ranges and it mostly connects two valleys. A pass can be motorable as well as trekkable and play a crucial role in providing essential facilities accessible even to remote areas. Umling La, located near LOC in Jammu & Kashmir currently holds the title of the highest motorable pass in the world, standing at an elevation of around 19,300 feet. Mana Pass, located on the India-Tibet border, is also one of the highest motorable passes in the world with an elevation of 18,410 ft and Kalindi Khal Pass having an altitude of around 20,000 feet is one of the highest trekking passes in the world, though it requires several climbing techniques to cross it. Other famous passes include Rohtang Pass (13,058 feet), Khardung La (17,580 feet) & Nathu La (14,140 feet).

The low area or depression between the mountains is termed as a valley. Valleys often consist of a river that flows through them. Based on their shapes, they are either U-shaped or V-shaped, but what’s important to know is that all U-shaped valleys develop from the V-shaped ones. Some famous valleys located in India are Zanskar Valley, Tirthan Valley, Dzükou Valley, Araku Valley, Kullu Valley, and Valley of flowers.

A Gully is one of the mountain features formed by the eroding activity of running water which cuts through the hills. They are usually deep and wide and stay dry for most of the year. Gullies are usually present on the hillsides where the soil is loose due to the causes including deforestation and over-grazing.

A canyon in a geographical formation that results after a river makes way between two cliffs and starts eroding the land until its elevation reduces to the level of elevation of the water body into which the river flows. Grand Canyon in the United States of America is one of the most cited examples of canyons. Some canyons present in India can be located in Raneh Falls, Madhya Pradesh, and Gandikota, Andhra Pradesh which is also known as the Grand Canyon of India.

The point of a mountain with the highest elevation is termed as a summit and major expeditions are named after the Summit attempts. Everest is the highest summit in the world which perches up to a height of 29,029 ft above sea level.

Summit is often confused with peak but a peak is a point of the mountain which is higher than the other points. So, a mountain may have multiple peaks but it has only one summit.

Col is the lowest point in a mountain which connects two mountain peaks whereas a saddle is a low-lying area which connects two mountains or peaks. Therefore, every col is a saddle but not every saddle can be a col. Cols are usually unsuitable for navigation but climbers often cross them during their expeditions and that is why it is considered one of the notable mountain features. The most coveted col for every climber is the South Col, connecting Mt. Everest and Mt. Lhotse. For Saddle, one can do an arduous trek to Ronti Saddle situated above the mysterious Roopkund lake (Lake of Skeletons) in Uttarakhand.

A ridge is a connecting link which joins adjacent mountains or mountain peaks. Unlike col, ridges are narrow formations with a steep slope on both sides. They are often used by climbers to cover distances. On the contrary, an arete is an extremely sharpened narrow ridge which separates two valleys. These are formed as a result of the movements of glaciers and the subsequent freeze-thaw erosion.

In mountain terminology, a massif is a structure that is formed when a bunch of mountain peaks, which cannot be identified as individual bodies, combine together and appear as a single body. They are joined by cols and deliver a delightful sight. The peaks which comprise a massif are always titled in numeric order, for example, Panchachuli massif, located in Uttarakhand, India, has peaks numbered from 1 to 5, 2nd being the highest peak. Other massifs located in India are Chaukhamba massif in Uttarakhand and Nun Kun massif in Jammu & Kashmir.

A Verglas is a thin sheet of ice that is formed over various objects in areas of high altitudes. It is generally caused when rainwater gets frozen by the icy winds and results in an almost transparent coating of ice over rocks and leaves. It is a common sight in regions located at greater elevations and can create hindrance for trekkers as they make the path slippery and dangerous. So, trekkers can either wait for the weather to warm up and melt away the icy formations or they can puncture the verglas and continue their climb.

A spur is that part of a mountain which projects out laterally in a tongue-like shape with a gentle slope descending from the top regions of a mountain or from a ridge. Spurs can be detected on a map as U or V-shaped contour lines projecting out from a mountain. They are also one of the important mountain features as spurs provide the preferred route during treks and expeditions. Even most of the roads in the mountains cut through the spurs. One of the well-known spurs, most of the mountaineers can relate to, is the spur at Ladari, which locates the Nehru Institute of Mountaineering in Uttarakhand.

When two ridges or spurs run alongside each other, then the low-lying area formed between them is termed as re-entrant. They are formed by the eroding activity of water which might still be present in the form of a stream. Generally, the water dries out in summer and one can witness the rocks which had previously been carried away it. On a map, they are represented by U or V-shaped contour lines pointing towards the mountains.

A snowline is a term given to the boundary in the mountains which separates the area of permanent snow from the area with the varying presence of snow. A permanent snowline marks that part of the mountain above which snow is present all around the year.

On the other hand, a treeline denotes the area above which trees are unable to grow due to the unsuitable climatic factors. It is marked with a gradual decrease in the number of trees which become sparse and deformed as they approach the treeline.

Also Read: Why Bhutan is one of the best foreign destinations for Indians?

A cornice is a protruding mass of snow which hangs from the ridge of a mountain or around the sides of depression. They are formed by the strong actions of wind flowing over the leeward side of a mountain. They collapse very frequently and therefore treading over or under them should be avoided. Though trekkers usually don’t encounter a cornice, it is one of the key mountain features for climbers.

A deep crack in a glacier caused due to the movement and stress at its surface, because of the various geographical reasons, is termed as a crevasse. They are a common sight in glaciers and create hurdles for mountaineers as these vertical fractures can be more than 20 meters wide and over 100 meters deep. Sometimes, crevasses are covered in snow and are known as hidden crevasses. They are hard to locate, which makes navigating on glaciers a difficult task.

So, these are some of the important mountain features, or one can features of Himalayan mountains as they are mostly found in the Himalayas in India.